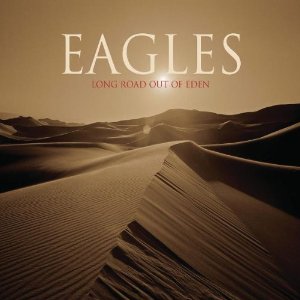 While the blogosphere was doting on Radiohead’s digital release of In Rainbows, the Eagles were making their own attempt to sidestep the recording industry with the release of Long Road out of Eden. But I’m not so sure I get the Eagles’ approach. For its first studio recording in nearly 30 years, the Eagles chose to distribute through Eaglesband.com and Wal-Mart. OK, I’m totally onboard with using the web (and plenty of other goodies are available on Eaglesband.com, too.) But Wal-Mart? First of all, Wal-Mart represents a questionable choice as a brand partner for an ornery group of hard-living guys who have cultivated an outlaw mythology. And have you actually tried to buy the recording at your nearest Wal-Mart?I did and nearly gave up after fruitlessly wading through aisles cluttered with cheap DVDs, T-shirts, and assorted household doo-dads. Finally I asked for assistance from a friendly clerk who was nice enough to guide me to one obscure rack somewhere in Aisle Z where the CDs were hiding. (And the Eagles rack in the music department contained none.) I thought Wal-Mart might at least have a few displays or in-store music from the CD instead of the Crowded House that I heard. I do like the recording, by the way . . . just wondering how many people are finding it.

0 thoughts on “Long road out of Wal-Mart”